The i-Tree community plays a significant role in improving and defining the future capabilities of the i-Tree suite of tools. Therefore, your ideas and comments are important. This forum will serve as a place where i-Tree users can make suggestions on ways to improve all aspects of i-Tree from functionality to the website. The i-Tree executive committee will periodically review suggestions for feasibility and future implementation.

I am just beginning to use Streets and found it troublesome that "condition" combines biological health (vigor) and structural health. These are VERY separate things.

If I use one of the "other" fields to track biologic health how badly will this screw up the reports etc.
Top

It is up to project managers to determine which condition codes they want to use in their individual projects and to work with their field crews to ensure consistency in evaluating the condition of a tree. Therefore, i-Tree does not specify how to evaluate biological or structural condition or health.

Although condition is common in most inventories, it is highly variable as some people may use any number of options, criteria or internal methods. In addition, the skill level of the evaluator can vary from volunteer to certified arborist.

As such, the i-Tree Streets condition option is somewhat flexible to allow a project manager to set up fields and adjust condition factor percentages to match their own evaluation system as much as possible. The condition value influences the replacement value and relative performance index reports. http://forums.itreetools.org/viewtopic. ... =condition

Since Condition is too vague I think future releases should separate these. Since you can have a tree which is biologically very healthy yet a severe hazard. and the other way around a nearly dead tree biologically which is not a hazard, (yet).

I am confused by your comment, since it seems to ignore the actual data structure of the software.

Streets separates condition into separate fields: "Condition of Folliage" and "Condition of Wood" (see attached page from current Manual). That division is designed to distinguish between biological health and mechanical stability, precisely for the reasons you state.

What am I missing? 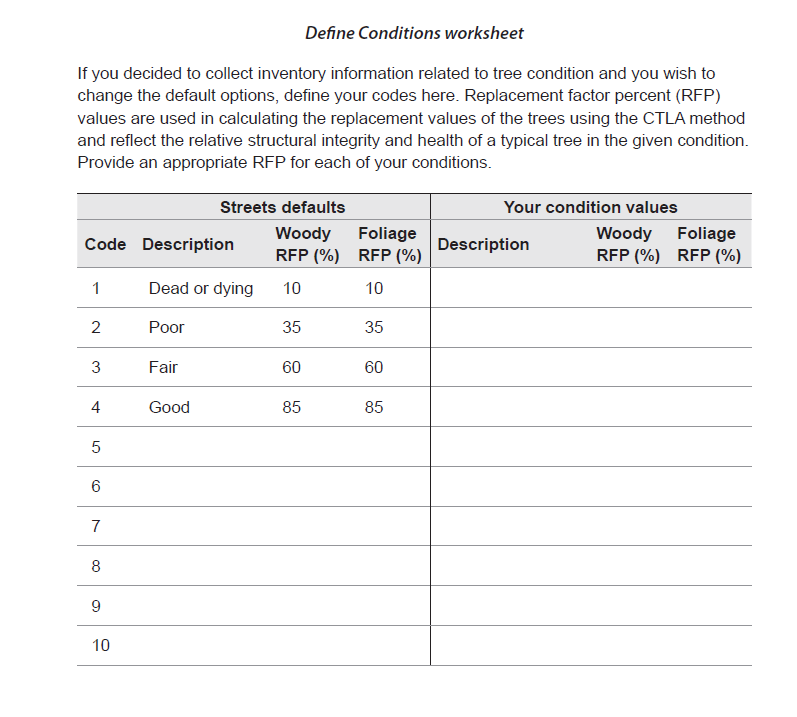 In order to have all possible options 4 biologic health and 4 structural health there are 16 different possible combinations.
Top

Let's distinguish between the data and the report. Al and I were responding to the data side, where health and stability are clearly separated.

On the report side, I asked Management

once how the values for foliage and wood were handled in the software, and was told that the two values were simply averaged to produce one of the general condition terms.

This leaves us with 2 choices:

1) produce the Streets report of the general term, which satisfies many clients
2) ignore the software report (nothing forces us to use it) and report instead the two separate categories collected individually.

I do the latter ("The average health..," "The average wood condition..."), explaining the implications of each and the complex manner in which they interact in the real world.

The complexity of wood condition(structure) and foliage (i prefer biological health or vigor) would warrant a separation in the reports and in the data collection fields. I spend a great deal of time with my customers explaining why the two conditions although related in some ways are very separate in others.

I had planned to do what you have done. Just wanted to see if there was a better way.

Does this make any sense to record condition

I just started working with my new PDA and see that the options for foliage and wood are separate. Sorry I am new to this and just getting started.
Top
Post Reply
8 posts • Page 1 of 1

Return to “New Ideas for i-Tree”