Issues related to i-Tree v5.x can be posted in this section. 5.x updates and known issues will be posted here also.
Post Reply
10 posts • Page 1 of 1

i-Tree Suite v5.0.9 updates are now available for download. i-Tree Streets and the Eco have been updated to address several known issues mostly related to reporting. The update patch can be accessed through the Help - Check for Updates option in most applications.

Details of the update patch can be viewed in the i-Tree Suite Change Log http://www.itreetools.org/resources/con ... ge_log.pdf

Al
A member of the i-Tree Team
Top

Well this is weird! I updated today from 5.0.6 to 5.0.9, though it took me three times to get it to finish correctly. I opened Streets and confirmed that the running version was 5.0.9. Then I opened an existing sample inventory project that has run fine in every version since 2007, and it seemed to be OK. When I checked the report on population, however, the total estimated population was given as 2,996. Problem is, every other version has reported 3,811!

I only installed Streets and Eco, if that makes any difference. I also noticed a message about updating project files somewhere along the way. Has anything like this been reported before on this or earlier versions? Suggestions?

I am going to try bringing in the original project file and see if that makes any difference.

Didn't make any difference. Guess my next move is to create a new project from the original data, huh?
Top

This may be related to an error discovered by user in Thailand who discovered a discrepancy with the population summary table. The population summary report was not accounting for sample projects with zone stratification correctly. I believe that individual zone population estimates were correct but the summary total was incorrectly combining all segments as one sample generating a different population total incorrectly. i-Tree 5.0.8 & Streets 5.1.0 integrated a major rewrite of most Streets reports and addressed the incorrect summary report. Therefore, updating your version and running the project may affect the old estimates.
A member of the i-Tree Team
Top

You mean that all the work I have done under contract to municipal clients over the last 7 years has been off by 25-35%?!

I am going to check the Tiger-Line mileage that we sampled and do a simple proportion:

That should give me the ballpark figure I need ATM.
Top

To follow up on this: we originally sampled 6% of the blocksides, and got the following results:

Since the total street line mileage using T-L files is 51.4, running the simple proportion yields 4,370 trees as an estimate for the entire city.

That may be somewhat high, but the estimate of earlier versions is a lot closer to it than what the newer versions are producing.

Jerry, the estimations in Streets are not based upon the number of linear miles. The basic calculation is as follows:

In versions prior to Streets 5.1.0 the total number of trees in the population was calculated using:

Thanks. I knew that Streets did not calculate this way, but was just trying to get another perspective on the population question.

At the population level, I believe that using 6% of the mileage in the little proportion I cited above should produce a valid estimate as well, if the initial distribution of samples was random and if the trees are at least reasonably evenly distributed. The latter is highly unlikely in many urban sites, but a high enough sample rate should take care of all but extremely skewed distributions. The spatial distribution of my 6% sample in this case was fairly good, as the attached shows.

So is your bottom line that the new figure is fine and all the older ones were faulty? Has anyone tested this taking random samples from complete inventories to compare the sample estimate with the true value? This is of more than academic interest to me, since I have a contract proposal to submit in the near future. 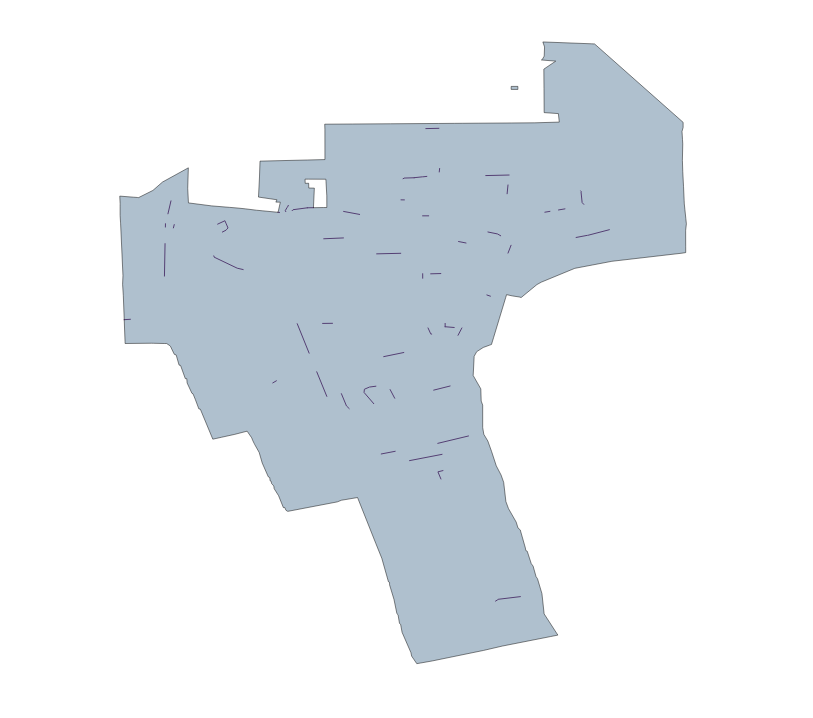 OK, hold it. Those spreadsheet numbers included planting sites, and if I take them out the numbers become as follows:

That gives me this population estimate of trees only for the whole city:

So now the new STREETS estimate is the closer one, and I will use it. Since the proposal will be for a complete inventory, it will be interesting to see how things shake out.
Top

Technically speaking it's not that the old values were wrong, its that they were inconsistent with the values shown on other reports. The purpose of stratification, or zones, is to increase the accuracy of population estimates by dividing the population into additional sub-categories. One reason you might want to stratify your data is to reduce the impact of tree density between two or more strata. For example, residential zones are most likely to have more trees per street segment than industrialized zones. Additionally, some trees may not thrive well in an a more industrialized environment. Stratification allows you to reduce the impact of these effects.

If you do not wish to stratify your study area, then you can use a single zone that covers your entire study area. If you remove the stratification from your one of your old projects, the results seen on the reports would match the old values. *Note: street segments must be unique prior to combining the zones.